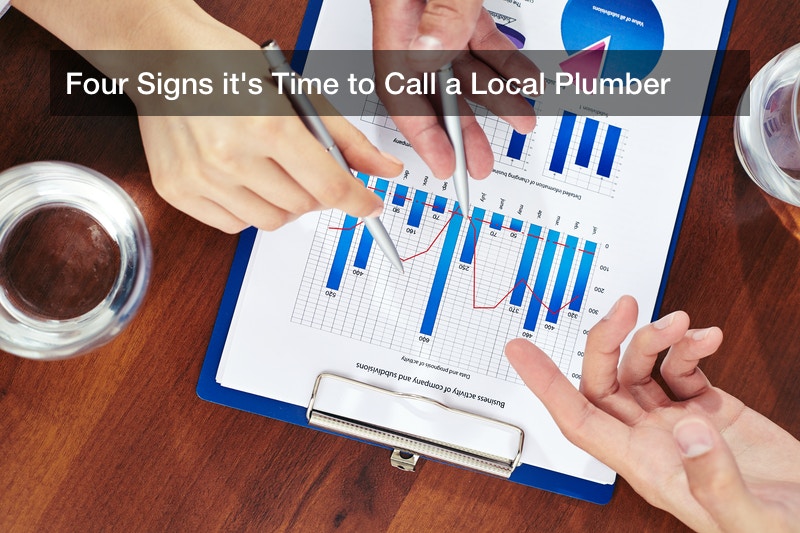 You’ve moved into your home, settled all the furniture, put the boxes away. Now you’re ready to relax and enjoy your home for what it is. However, owning a house is an exercise in patience. Small problems may pop up as often as big problems, and as a homeowner, it’s necessary to pay attention to these problems as they show up.

Common among homeowners are leaks of all kinds – faucets, toilets, even washing machines. These little leaks may seem like no big deal, but the numbers say otherwise. Approximately 10 percent of households in the United States have leaks in their plumbing system. These little leaks can waste up to 90 gallons of water per day. These unbelievable statistics make plumbing repairs an absolute necessity, especially when you’re potentially paying for the wasted water or electricity. That’s why we’re here to talk about four signs it’s time to call your local plumber, sooner rather than later.

This first sign is also one of the most obvious. A leaky faucet may seem like a trivial annoyance, but those leaking faucets or shower heads can add up to a lot of wasted water. There’s a whole host of reasons as to why your faucet is leaking, some simple and some not so simple. Local plumbers can expertly assess and repair your faucet so no more drippy water is wasted day after day.

Nothing causes us to reach for the phone to call a local plumber faster than turning on the shower and discovering absolutely no water is coming out. Again, there’s a whole host of reasons as to why this is occurring, but for those living in cold weather climates, it can be potentially disastrous. Frozen pipes in the winter can lead to problems like burst pipes, which aren’t so simple to fix, and burst pipes can be very costly to fix. That’s why it’s critical to act on an instance of no water as fast as possible.

Just because you have water flowing doesn’t mean it’s going to get hot. And hot water is a crucial element to maintaining the health of your family. Depending on the type of hot water heater you have, there may be a dozen different reasons why your water isn’t getting hot. Nearby plumbers can safely assess your hot water heater and diagnose the problem, getting you on the fast track to having hot water once again.

An overflowing toilet is not a pretty sight. No one enjoys cleaning up the mess an overflowing toilet leaves behind, and if it doesn’t seem to stop, not many know what to do. An overflowing toilet not only affects the cleanliness of your house, but it puts a damper on your entire bathroom. If you’ve got a toilet that won’t stop overflowing, it may be a sign of clogged up pipes, or even partially frozen pipes. A plumber can expertly assess the situation and provide the best solution to get your bathroom back on track.

No homeowner wants to deal with plumbing problems. The simplest of leaks can signify a much larger problem with the pipes in your home, as well as be just plain annoying. If you’ve got some plumbing issues in your home, reach out to a local plumber sooner rather than later. You’ll be guaranteed to save yourself some hassle and inconvenience down the road.